Competing in the international market, requires a strong global presence. We continue to strengthen our presence in key markets, develop innovative solutions and acquire companies in prioritized areas. Saabs products are sold to over 100 countries and we currently operates in over 30 countries.

Under clear blue skies, a team of test pilots and flight test engineers from the Swiss Air Force and the Swiss federal defence procurement agency, Armasuisse, visited Saab in Linköping in Sweden to perform test flights with the Gripen E/F test aircraft. 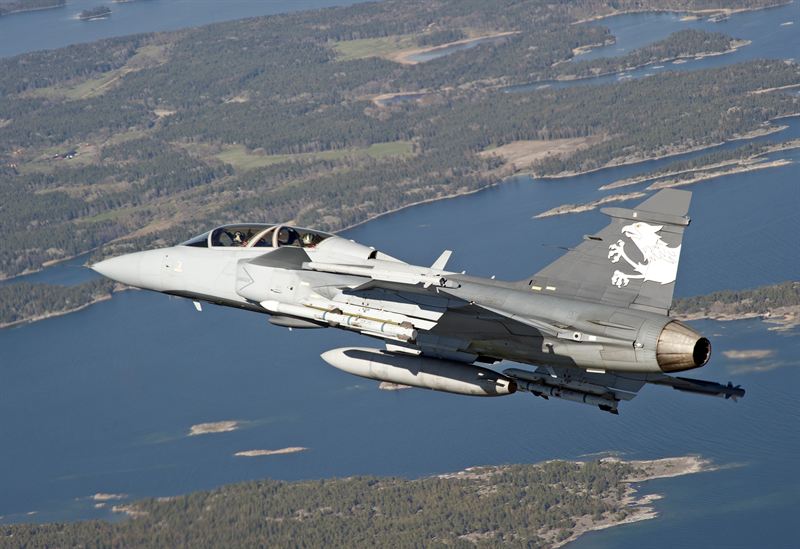 On 30 November last year the Federal Council selected Gripen E/F as the preferred candidate to replace the Swiss Air Force's ageing fleet of Northrop F-5E/F Tiger. The Swiss Department of Defence, Civil Protection and Sports (DDPS) was commissioned to start discussions with Saab and the Swedish Government to optimize Saab's offer. The negotiations continue according to plan and the test flights inSwedenare part of the on-going process.

The three day programme, conducted between 2-4 May, included simulator training and four test flights. The test flights focused on air defense and air policing mission profiles with different weapon configurations, which included IRIS-T as well as both METEOR and AMRAAM.

“We tested the flight performance simulating an operational air defense mission profile.The flight was packed with test points. We were able to perform them all. A successful flight”, Lt Col Fabio Antognini, Swiss Air Force

“We performed flight performance tests using an air policing scenario. We simulated a quick reaction alert and a maximum performance intercept to high altitude and supersonic speed. We tested the engine in the entire envelope and are pleased with the results.” says Bernhard Berset, Chief Test Pilot at Armasuisse.

The Gripen E/F test programme is running according to plan. In the upcoming fourth phase of testing, Saab continues to integrate new leading-edge technologies which includes further enhancement of the avionics and displays. The radar system will also be further enhanced through the re-installation of a newer version of the AESA radar. The previous test phases have focused on areas such as flight handling, aerodynamics, performance improvements including the new GE F414G engine and increased weapon loads as well as the introduction of new sensors and new avionics in the aircraft.

“The co-operation between the two teams has been truly fantastic. We conducted four test flights with the Gripen E/F test aircraft, which performed, as ever, perfectly. We have really shown the growing capabilities of this aircraft and we demonstrated everything requested, including increased performance, handling and endurance,” says Richard Ljungberg, Chief Test Pilot, Saab.

Saab serves the global market with world-leading products, services and solutions ranging from military defence to civil security. Saab has operations and employees on all continents and constantly develops, adopts and improves new technology to meet customers’ changing needs.

Saab has signed a framework contract for the supply of its Barracuda multispectral camouflage systems with the French defence procurement agency, Direction générale de l'armement (DGA). The contract includes the delivery of new camouflage systems as well as a system adaptation phase in cooperation with the DGA. The contract is for eight years and provides for annual deliveries.